I finally found this after 3 years! I was on the original SIFriends before it got shut down. I had the random urge to google it tonight and viola!

Anyways, My name is Brooke. I am 16 and a junior in High School. I live in Illinois, USA. I have been a self-harmer for 4.5 years. I have also dealt with mild anorexia, anxiety and depression. I've had no actual suicide attempts be I almost did it a few times. I had be clean for a little over a year but that got screwed up by an ex who decided to cheat on me in September of 2012, horrible relapse. Currently I have been clean since 18 February 2013. I still have my urges to do it when I'm stressed out, but I have an amazing boyfriend who helps me cope rather than me going for my blades.

I absolutely love helping people. When I know that I have helped someone, it makes my day. That's one more person that isn't going to hurt or kill his/herself that night. I hate the idea that someone feels so bad that they resort to that. I wish I could take everyone's pain and suffering away, no on deserves to feel like that.

"Never give up. There is always hope, there is always love. You've just gotta open your heart to it." -Austin Carlile, Of Mice & Men 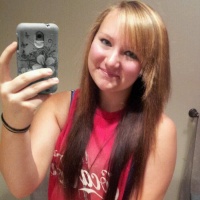 Well I'm glad you found the new place! and that you are feeling better.

Welcome back my friend!